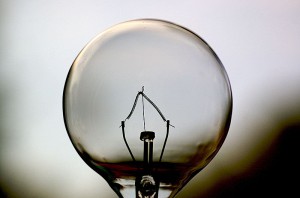 Airlines may soon use a new method of delivering data: lightbulbs that can deliver internet speeds 100 times faster than traditional wi-fi. The new  wireless technology Li-Fi is similar to Wi-Fi. It allows data to be sent at high speeds using visible light communication (VLC).

The new technology has several advantages over Wi-Fi. It offers greater security on local networks as light cannot pass through walls, which means there is less interference between devices. One of the most significant advantages, however, is the speed that the technology provides. Researchers have achieved speeds of 224 gigabits per second in lab conditions.

Li-Fi technology was invented in 2011 by Professor Harald Haas of the University of Edinburgh, first demonstrated Li-Fi as a part of the D-light project at the school’s Institute for Digital Communications. Haas proved that with a flickering light from a single LED, we could transmit more data than a cellular tower.

The inventor of Li-Fi, Professor Haas claims that in the future every LED lightbulb could be used as an ultra-fast alternative to Wi-Fi and that current infrastructure is suitable for the integration of Li-Fi.

While Li-Fi may not completely replace the traditional Wi-Fi. Both technologies could be used in parallel to create more efficient networks.

Deepak Solanki, the startup Velmenni CEO, says his team is currently doing a pilot project with a private client where they are setting up a Li-Fi network to access the internet in office space and if all goes according to plan, the technology could reach consumers in just three to four years.

While Li-Fi is touted as a possible channel for wireless communications on airplanes, intelligence agencies, also are interested in the potential of LiFi for secure wireless data transfers.

This entry was posted in New Technologies and tagged new technology, transportation. Bookmark the permalink.