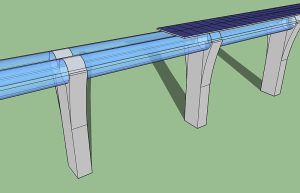 Elon Musk says he has “verbal” government approval to build the world’s longest tunnel for an underground ultra-high-speed train line to transport passengers between New York and Washington DC in just 29 minutes.
The train is known as hyperloop and it would make the 220-mile connection in 29 minutes, Musk says in a post on Twitter. A spokesperson for his new digging enterprise, called Boring Company, declined to give further information on the project.
Musk says the hyperloop will go ‘city center to city center,’ with up to a dozen or more entry/exit elevators in each city. The news came just weeks after Musk said he had a “promising” conversation with the Mayor of Los Angeles Eric Garcetti about building a tunnel network in the city that would “carry cars, bikes & pedestrians.”
The hyperloop is a high-speed rail system that uses magnetic levitation and near-vacuum conditions. Musk outlined his plans for the system for the first time in a blog post and a 57-page PDF in 2013. People and cars will be transported inside aluminum pods traveling a speed of up to 800 miles per hour inside elevated tubes.
Last year, Musk made a hyperloop test track near the headquarters of his rocket company SpaceX in Hawthorne, California, and hosted a competition for teams of students to race their vehicles. So far, no human has tried to ride in a hyperloop prototype.