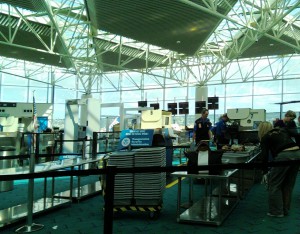 You are standing in an airport security line, taking your shoes and belt off, emptying your pockets into a plastic bin. Wouldn’t it be easier if you just went through the Xray scanner ?

Well, that’s exactly what a very inexperienced Chinese traveler did and he was caught on CCTV. This footage has gone viral on social media over the past weeks.

The hilarious video shows a confused man attempting to accompany his luggage through the bag scanner because he couldn’t understand how the machine worked. However, no one could explain exactly when and where in China the incident occurred.

First, the CCTV camera shows the traveler who is holding his bag in his left hand, approaching the security checkpoint and being directed to the X-ray scanner. The security officer points to the conveyor belt while instructing the man to put his bag down so it can be inspected.

The official is then left stunned when, moments later, instead of putting the bag on the belt and then walking through a metal detector, what is standard at airport, the passenger decides to climb on to the conveyor belt and begins to crawl into the machine.

The security guard steps forward in an apparent attempt to stop the taveler, and then turns away as he disappears inside the scanner. Despite the official shouting at the man not to climb into the machine, he vanishes from sight. See the video here.