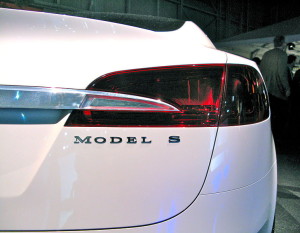 A Model S slammed into a highway barrier when its autopilot system malfunctioned and failed to spot the merging of traffic lanes.
Several days ago, a Tesla Model S was being driven on autopilot down a highway near Dallas, Texas, when it plowed into a barrier at a construction zone. The driver wasn’t injured, but he blamed Tesla’s autopilot for the accident.
When the road required the driver to merge lanes, for some reason, the autopilot computer on board the Tesla failed to recognize the obstruction and the road change of direction leading the car to crash into the barrier.
The accident was caught on the dashboard camera of a vehicle following the Tesla during the event and the footage actually shows that the Tesla needed to merge or change lane in order to avoid the barrier – a situation that the Autopilot probably shouldn’t be expected to be able to handle.
Forward Collision Warning feature didn’t work as the Tesla’s owner claims that there was no warning. Also, the Automatic Emergency Braking is actually not designed to engage if there is an alternative and in this case, the vehicle wasn’t supposed to brake in order to avoid the barrier, the Autopilot shouldn’t be left to react without the driver intervening.
What is also clear from the video is that the design of the road at the place of the accident is quite awful since even the driver in the car with the dashboard camera almost crashed into the barrier.
Six months ago, Tesla updated Autopilot software to rely more on radar sensors and less on cameras. The update also disabled the automatic steering system if a driver doesn’t keep both hands on the wheel. A few months ago, Musk said that by the end of this year a Tesla should be able to drive in full autonomous mode from Los Angeles to New York without the need ‘for a single touch’ on the wheel. He added that all new Tesla models would come with an $8,000 package for technology that allows the vehicle to drive itself.