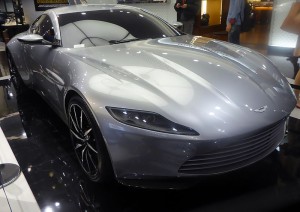 Now you can buy James Bond’s Aston Martin DB10. You just have to win it at auction first.
If you loved James Bond’s Aston Martin DB10 in Spectre and wished you could drive it too, then you were disappointed to hear that Aston had no plans to put the model into production. However, the two-door coupé especially created for last year’s James Bond film Spectre by Aston Martin will be put on auction with a minimum price of £1m.
Christie’s is hosting a James Bond-themed auction on February 18 in London. The British car manufacturer will put on sell one of 10 DB10 cars made for Spectre along with 23 other Bond-related items for charity.
The car has a 4.7-liter V8 petrol engine, six-speed manual gearbox and a top speed of 190 mph. The chance to drive a James Bond vehicle sounds incredibly tempting, unfortunately, you cannot take DB10 out for a drive as Aston Martin doesn’t have certification for the car to be on public roads.
Aston Martin has been associated with James Bond since the release of Goldfinger in 1964 when the DB5 became the most famous Aston Martin car. Most of the DB10s were modified for use in the filming of Spectre. The DB10 put on sell at Christie’s auction house is one of only two vehicles which were left unmodified and used for display purposes. In addition, the car has been signed by James Bond actor Daniel Craig.
The film is reported to have destroyed seven specially designed Aston Martin DB10 sports cars and a variety of other vehicles at a cost of more than $36m during shooting.