“Government’s view of the economy could be summed up in a few short phrases: If it moves, tax it. If it keeps moving, regulate it. And if it stops moving, subsidize it.”
Quote by Ronald Reagan, Remarks to the White House Conference on Small Business (August 15, 1986) 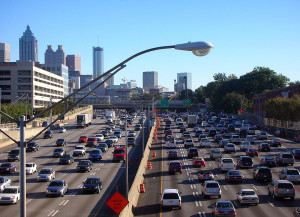 Cars are becoming more and more fuel efficient and the number of hybrid and electric vehicles is increasing over the last years. It is inevitably resulting in less revenue for the roads and highways. Although the gas tax has been mounting, it isn’t generating enough money for road construction and maintenance.

Lawmakers in some states are considering alternative ways to enhance the revenue. They are looking at introducing a vehicle miles traveled (VMT) tax, a fee that charges the motorists for every mile they drive.

The idea of a VMT fee is being discussed, criticized and sometimes rejected over the years. Meanwhile, several states have conducted pilot projects to test out the VMT tax. In 2013, Oregon passed the first legislation in the U.S. to establish the VMT tax system on a voluntary basis. The program is launched and 5,000 volunteers will be charged 1.5 cents per mile driven. They will receive a refund on the difference between the mileage tax and the traditional fuel tax.

For many years, we have been pushed to use hybrid and electric vehicles or buy more fuel efficient cars in order to use less gas. And now what is the reward for our efforts? The VMT tax discourages the use of fuel-efficient, low-polluting vehicles because those would be taxed at same rate as the traditional ones.
Privacy concerns are raised and lawmakers are trying to find the most effective way to monitor drivers’ miles while protecting their privacy as well.

However, there still are too many open questions. Just how effective would be the new VMT tax for road funding? Is the VMT concept the best alternative funding mechanism to replace the traditional gas tax? What would happen if people drove less their cars? And after VMT tax, what is next?