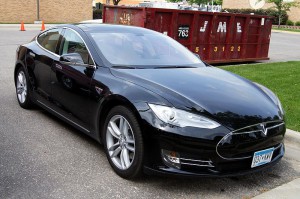 Tesla denied Autopilot is to blame for the crash in Brussels. The driver was in control without using Autopilot when the accident took place.

A Model S crashed into parked cars in the Brussels borough of Saint-Gilles on Tuesday and the driver reportedly said he was outside the car, with the engine running.

However, Tesla Inc. denied reports made earlier this week that its Model S vehicle started up on its own and crashed into several cars this week while in Autopilot mode, as the driver in the incident was operating his car himself.

In the early evening of May 29, police received a call for an incident involving a Tesla and five cars, but did not intervene as the owners decided to handle the case through their insurance companies, a spokesperson for Brussels South police said. After investigating the facts of the collision, police confirms that “the driver was driving and operating his car himself, without the use of its Autopilot feature, which is a level 2 driving assistance system that does not make a Tesla a self-driving car,” a Tesla spokesperson announced.

Tesla is always reiterating that drivers must keep their hands on the wheel and eyes on the road at all times while using Autopilot feature.